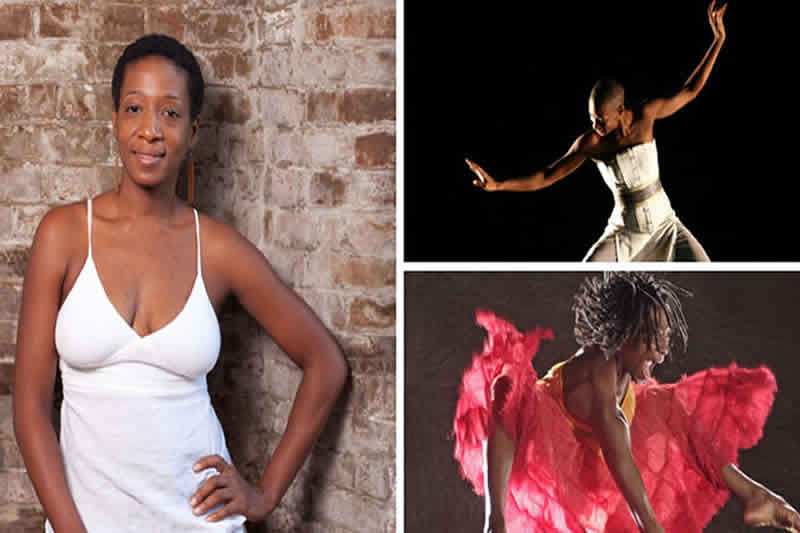 Caribbean-American dancer-choreographer Tania Isaac was named one of “25 to watch” by Dance Magazine in 2006, and her artistry has continued to blossom. She fuses choreography with personal documentary and social commentary and grapples with identity, post-colonial issues, feminism, and juxtapositions of European and African influences, resulting in dances that are elegant, dramatic, and highly accessible. An electric and commanding performer, Isaac earned an M.F.A. in dance from Temple University in 2000 and is an able scholar, having penned articles for publications such as Susanna Sloat’s anthology Making Caribbean Dance (University Press of Florida, 2010). Her current work is a potentially groundbreaking exploration of creative method she calls the “Open Notebook“—a way of turning a room into a laboratory of investigation and participatory dance. She developed this project during a 2006 Residency at the Maggie Allesee National Center for Choreography. “I fell in love with the idea that moving could be intellectual practice in itself,” says Isaac. “I enjoy the messy and exhausting process of bringing things to life.”

A self-described kinesiophile and lover of information; physical and verbal; Tania Isaac was born in Castries, St. Lucia and although intended by educational design to enter a traditional science based field; discovered along the way a love of movement, a love of questions, a love of challenge and a desire to find a different way to be an active part of the social fabric. Since then, she has spent her career working towards a model of performance and conversation that seeks to span and deepen her interest in esthetic, cultural and academic practices. Honored as one of Dance Magazine’s “25 to watch” (2006) Tania Isaac has been faculty at Bates College Dance Festival, Resident Artist at Painted Bride Art Center in Philadelphia, and a US/JAPAN Exchange Artist through Philadelphia Dance Projects, Dance Theater Workshop and the Japan Foundation. She has received grants form the Independence Foundation, Dance Advance (a program of the Pew Charitable Trusts), The National Performance Network, the Leeway foundation, Harlemstage (formerly Aaron Davis Hall) Fund for New Work. She is the recipient of the 2008 Pennsylvania Council on the Arts Fellowship Award.

Ms. Isaac is a former Associate Artist at the Atlantic Center for the Arts and a former member of Rennie Harris Puremovement, Urban Bush Women, and Li Chiao-Ping Dance. In 2006, she was a Choreographic Fellow at MANCC, creating a template for a new working process ‘open notebook’. In partnership with Francisca Plummer of Saidi Consulting (St. Lucia), Tania is also the co-founder of Imprint: Dialogues of a generation, a social action program geared towards developing conversations between youth and civic leaders. She conducts presentations as a Commonwealth Speaker with the Pennsylvania Humanities Council (PHC); presents workshops and classes; creates new work and tours internationally. Isaac has worked closely with WHYY TV and the PHC to create a segment of Humanities Live! a TV special featuring her approach to presenting Caribbean Social Dance in Historical Context. She has been adjunct faculty at Bryn Mawr College and has taught and performed in extended residencies at Bennington College (VT) and UW –Madison (WI), Virginia Commonwealth University (VA) and The Ohio State University among others.  Helen, Heaven & I, a personal essay tracing the history and evolutions of Social dance forms in St. Lucia and their impact on her choreographic work, will be featured in an upcoming anthology of Dance writings. In addition, with  Fluid Performance Dynamics: Caribbean Movement Esthetics in a Post-Modern Frame presented in 2008 at the International Conference of Arts and Humanities, she begins her research into creating direct links between movement, physics and linguistics.

Tania is a graduate with honors from the University of Wisconsin – Madison and received her MFA from Temple University where she served as graduate assistant and University Fellow.